This lesson includes introductory information on different types of eclipses, as well as crucial information from heliophysics -- the study of the nature of the Sun and how it influences the very nature of space. We will also examine historical and cultural worldviews of eclipses and learn about some current citizen science projects involving eclipses.

After completing this lesson, students will:

This lesson also covers both historical and contemporary perspectives on eclipses, as well as various worldviews on eclipses. You will also learn about some important citizen science projects.

Astronomy is the science responsible for studying the stars, planets, phenomena such as eclipses and more. Throughout our history, we have seen the important role that astronomy has played and how it has revolutionized the life of human beings. The following two interactive modules offer general information about eclipses and the sun -- information that will be beneficial as you begin your work on the Nationwide Eclipse Ballooning Project. 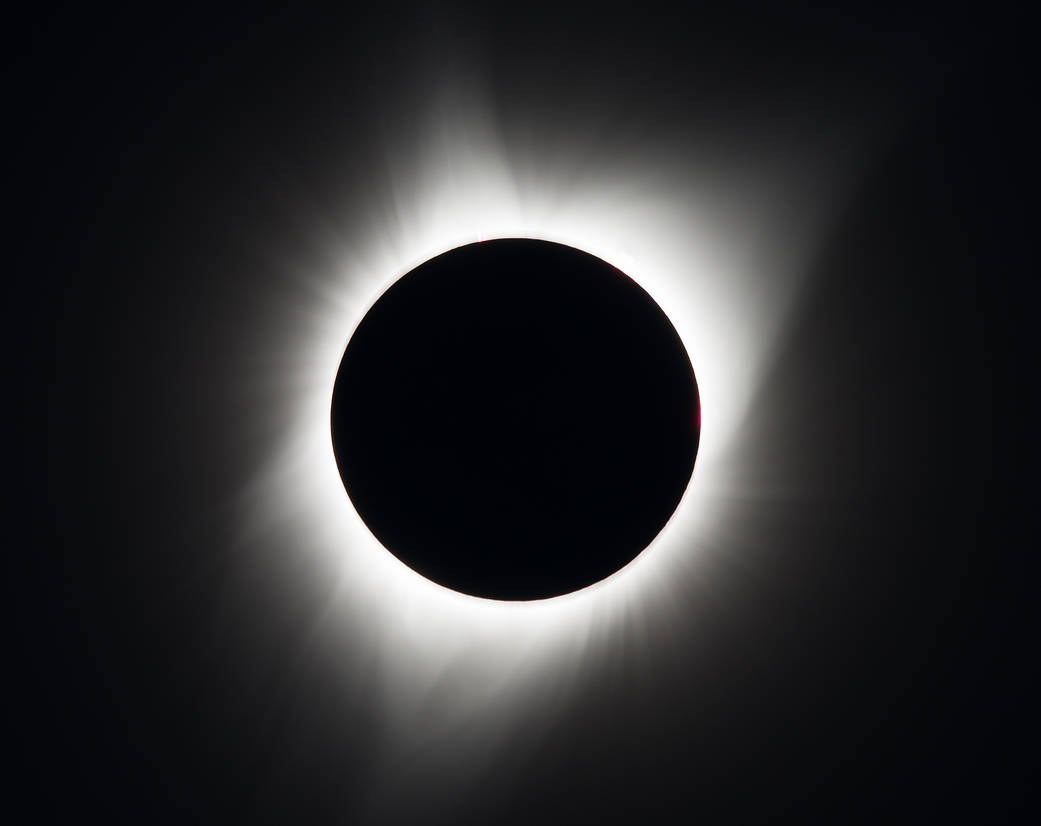 An eclipse is an amazing natural phenomenon that involves the Sun, Moon, and Earth. People can experience lunar and solar eclipses on Earth when the Earth, Moon, and Sun line up. Eclipses occur when celestial objects move into one another's shadow.

This short interactive module includes images, video clips and 3D models to help you engage with the topic. Please note: These modules and the Sun modules below were created by a student intern and may contain some grammar errors or typos. We are working to clean them up. Thanks for your patience!

Introduction to the Sun 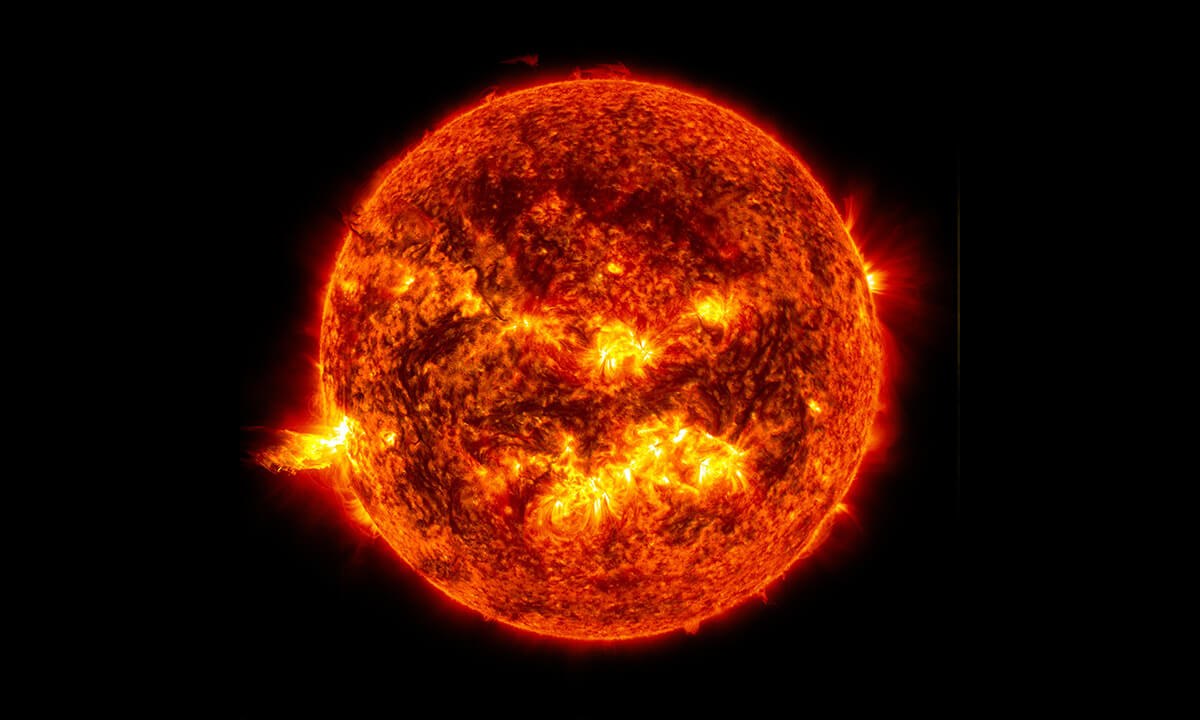 The Sun is the closest star to Earth and is the center of our Solar System. This star has many functions on earth that are essential for life, it generates light, heat, and energy for the Earth. The sun keeps the Earth warm, at a temperature where there is liquid water, which all forms of life need to survive. In addition to being warm, it also serves as a light, allowing animals and plants to use this energy from the sun. [Image credit: NASA]

This short interactive module includes images, video clips and 3D models to help you engage with the topic.

According to NASA's Eclipse 101 website, the earliest writings we have showing that people paid attention to eclipses in any official way are around 5,000 years old.

In 1999, Irish Archeoastronomer Paul Griffin investigated the Loughcrew Cairn L Megalithic Monument in Ireland, and discovered that a set of spiral-shaped petroglyphs that might correspond to a solar eclipse which occurred on November 30, 3340 BCE. The symbols display a consistent coding of the sun, moon and horizon, and of the 92 tracks of total solar eclipses, only the one for 3340 BCE visible at this site displayed the same geometric relationships.

In Ancient China, solar and lunar eclipses were regarded as heavenly signs that foretold the future of the Emperor. The ancient Chinese believed that solar eclipses occur when a celestial dragon devours the sun. They also believed that this dragon attacks the Moon during lunar eclipses. In the Chinese language, the term for eclipse was "shi" which also means "to eat".

The ancient Babylonians and Greeks also left historical records of predicting and viewing eclipses more than 2,500 years ago.

For more contemporary views, the NASA historical eclipse image archive has images dating back to 1869.

Historical records show that the prediction of the lunar eclipse in 1504 was used by Christopher Columbus to intimidate and pressure the inhabitants of Jamaica to keep provisioning his crew. The following entry is abbreviated from Wikipedia:

"On 30 June 1503, Christopher Columbus, in an effort to induce the inhabitants of Jamaica tocontinue provisioning him and his hungry men, successfully intimidated them by correctly predicting a total lunar eclipsefor 1 March 1504. Columbus landed — and was stranded — in Jamaica, and the Indigenous people welcomed him and his crew and fed them, but after six months, they halted the food supply, dissatisfied with what the Spaniards could provide in trade. Columbus used an almanac to successful predict an upcoming lunar eclipse and used this information to his advantage. He requested a meeting for that day with the leader and told him Godwas angry with the local people's treatment of Columbus and his men. Columbus said God would provide a clear sign of displeasure by making the rising full Moon appear "inflamed with wrath."

The lunar eclipse and the red Moon appeared on schedule, and the indigenous people were impressed and frightened. The son of Columbus, Ferdinand, wrote that the people:

with great howling and lamentation they came running from every direction to the ships, laden with provisions, praying the Admiral to intercede by all means with God on their behalf; that he might not visit his wrath upon them ...[7]

Columbus went into his cabin, ostensibly to pray, and timed the eclipse with his hourglass. Shortly before the totality ended after 48 minutes, he told the frightened Indigenous people that they were going to be forgiven.When the Moon started to reappear from the shadow of the Earth, he told them that God had pardoned them.

In the book entitled Traditions of the Sun, The Sun-Earth Connection at Chaco Culture National Historical park, the authors state: "Scientists today observe the sun with satellites and telescopes, but Sun watching isn't new. People have been observing the Sun and its patterns for a very long time.

Chaco Canyon is in a part of the United States called the Four Corners region, where the states of Colorado, new Mexico, Arizona and Utah come together at a single point. Ancestors of today's Pueblo Indian people settled in Chaco Canyon and its surrounding region. A thousand years ago, they constructed monumental buildings, the remains of which can still be found today.

Ancient astronomers at Chaco Canyon left behind lots of evidence of Sun watching in their buildings and rock art, including Pueblo Bonito, a large building that lines up along the north, south, east and west—the cardinal directions. Placing this building so precisely required observations of the Sun and the stars.

Some scientists think that the Ancestral Puebloans might have seen a solar eclipse and recorded the event in an ancient petroglyph found at a place called Piedra del Sol, which is Spanish for Rock of the Sun. The petroglyph seems to represent the corona streaming around the Sun, which is blocked by the moon during a total solar eclipse.

Celebrating the Sun connects the past and present in Chaco Canyon. According to Dr. Shelly Vldez of the Laguna Pueblo, 'The Sun is seen through our culture in many different forms. We're connected with the Sun spiritually through the ceremonies that we have, through the seasons, through the cardinal directions, how we live, and how we see that all nature is connected.'"

NASA and other organization support several citizen science projects that relate to eclipses.

The Eclipse Soundscapes Citizen Science Project revists an early attempt (1932!) to document animal reactions to a the 1932 total eclipse. By working with game wardens, naturalists, and members of the general public, the project generated nearly 500 reports of the activities of birds, mammals, insects, reptiles, and fish during the eclipse nearlly 100 years ago.

For the contemporary Eclipse Soundscapes project, NASA subject matter experts (SMEs) will work with citizen scientists to collect audio recordings from eclipses and analyze acoustic data to determine how disruptions in light and circadian rhythms may affect ecosystems. The analysis of these audio recordings will be central to ARISA Lab’s informal learning objective, which is focused on fostering self-efficacy in under-represented learners, specifically members of the Blind and Low-Vision community (BLV).

GLOBE Observer (GO) is a NASA-supported citizen science tool that allows volunteers to take observations and contribute to the Global Learning and Observations to Benefit the Environment (GLOBE) community. GO volunteers collect data on phenomena such as clouds, land cover and mosquito habitat (among others) in support of Earth system science research, and interpret NASA and other satellite data

GLOBE Observer Eclipse is a tool in the GLOBE Observer app that is only opened up when a solar eclipse is happening somewhere in the world. Citizen scientists can then take air temperature measurements using a meteorological thermometer, as well as taking regular observations of sky conditions using the Clouds tool. The data gathered by citizen scientists will complement the scientific quesetons answered by NEBP and other scientific missions, adding potential thousands more data points to the overall picture of what happens during an eclipse.

Additionally, when young people (or those of any age!) participate in the scientific process, research shows that their confidence and interest in STEM is increased. Perhaps these future scientists and engineers will join the next NEBP team in 2026 and beyond!

An eclipse is an awe-inspiring celestial event that drastically changes the appearance of the two biggest objects we see in our sky: our Sun and Moon. On Earth, people can experience solar eclipses when Earth, the Moon, and the Sun line up. NASA studies solar eclipses on the ground, in our atmosphere, and in space, influencing solar and Earth science. This page includes countdowns to the annual solar eclipse on Oct. 14, 2023 and the total solar eclipse on April 8, 2024 as well as preparation tips for observing them.

This website was built to prepare people for the 2017 total solar eclipse and includes excellent resources on eclipses overall, includingsafety, eclipse history, how eclipses work, common misconceptions and more.

This NASA SciAct project engages communities across the nation with educational programs about heliophysics. From nationwide educational programming to community-centric projects, NASA HEAT is actively partnering with museums, youth organizations, classroom teachers, and many others to teach people about our closest star, the Sun, and how it affects our lives. 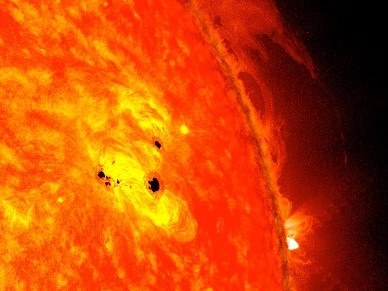 The module, A Deeper Look at the Sun, expands on the Introduction to the Sun module above and focuses on the Sun in greater detail. Please note: The module was created by a student intern and may contain some grammar errors or typos. We are working to clean them up. Thanks for your patience!

You will learn about:

Download the GLOBE Observer app and begin using it to collect data on clouds, land cover, tree height or mosquito habitat. As you become more familiar with the app, you will be ready to use it when the eclipse tool appears!

Don't forget to track today's progress in your portfolio

Will you take a few minutes to give us some feedback on this lesson? Thank you!
Atmospheric Science Team // Engineering Team

Return to the course home pages